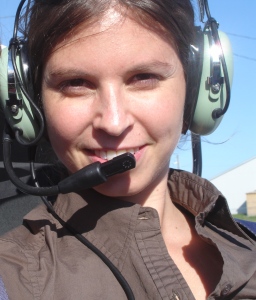 Claudia de Rham is an assistant professor at Case Western Reserve University working on cosmology and particle physics and is particularly interested in models of modified gravity and their embedding within consistent field theory frameworks.

How does matter couple in theories involving several metrics? We unveil the possibility for a new effective metric.

While the theory of general relativity will mark its 100 year anniversary next fall, the realization that the expansion of our universe may currently be accelerating has opened up the door for a series of investigations to understand the behavior of gravity at large distances – as large as the current observable Universe or about 1010 light years. Among the different possible modifications of gravity explored in the past decade, theories of gravity which involve several metrics have played a crucial role. The idea that gravity could be the outcome of several interacting metrics is of course not a new concept and such theories have been explored for more than 70 years, but their consistent realization has only been derived very recently in the past few years, and we are finally reaching a stage where we can understand more precisely how matter couples to gravity in such theories.

A priori different matter fields may couple to any combination of the metrics, but our findings, published in our recent CQG article, show that the consistency of these theories (absence of ‘ghosts’) severely constrains the coupling to matter to be very similar to what we would have in the case of general relativity with a single metric. These results can be shown already at the classical level where the counting of the number of degrees of freedom can be established, but it is actually simpler to understand them from a quantum mechanical viewpoint by simply performing a one-loop stability analysis.

While our results confirmed a certain level of uniqueness when it comes to the coupling to matter, it came with one surprise: when treating these types of modifications of gravity as effective field theories valid at and below a certain strong coupling scale, our analysis uncovered the existence of a new ‘composite’ effective metric to which matter fields may couple without leading to any ghost below that strong coupling scale. With this new effective metric, new types of cosmologies are possible to explore and compare with observations. Several studies have since then explored their phenomenological viability, and could have interesting consequences as much for the early of the universe (where the coupling could be relevant for inflation) as for the current state of our universe.

Follow CQG+ by entering your email address in the ‘follow’ box at the foot of this page. Followers of CQG+ enjoy regular updates from the site at a schedule of their choosing and can unsubscribe at any time.