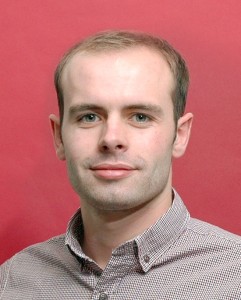 Michael Bishop is a Senior Press Officer for IOP Publishing

The team responsible for the Oscar-nominated visual effects at the centre of Christopher Nolan’s epic, Interstellar, have turned science fiction into science fact by providing new insights into the powerful effects of black holes. In a paper published today, 13 February, in IOP Publishing’s journal Classical and Quantum Gravity, the team describe the innovative computer code that was used to generate the movie’s iconic images of the wormhole, black hole and various celestial objects, and explain how the code has led them to new science discoveries. Using their code, the Interstellar team, comprising London-based visual effects company Double Negative and Caltech theoretical physicist Kip Thorne, found that when a camera is close up to a rapidly spinning black hole, peculiar surfaces in space, known as caustics, create more than a dozen images of individual stars and of the thin, bright plane of the galaxy in which the black hole lives. They found that the images are concentrated along one edge of the black hole’s shadow. These multiple images are caused by the black hole dragging space into a whirling motion and stretching the caustics around itself many times. It is the first time that the effects of caustics have been computed for a camera near a black hole, and the resulting images give some idea of what a person would see if they were orbiting around a hole. The discoveries were made possible by the team’s computer code, which, as the paper describes, mapped the paths of millions of lights beams and their evolving cross-sections as they passed through the black hole’s warped spacetime. The computer code was used to create images of the movie’s wormhole and the black hole, Gargantua, and its glowing accretion disk, with unparalleled smoothness and clarity.   It showed portions of the accretion disk swinging up over the top and down under Gargantua’s shadow, and also in front of the shadow’s equator, producing an image of a split shadow that has become iconic for the movie.   This weird distortion of the glowing disk was caused by gravitational lensing—a process by which light beams from different parts of the disk, or from distant stars, are bent and distorted by the black hole, before they arrive at the movie’s simulated camera. This lensing happens because the black hole creates an extremely strong gravitational field, literally bending the fabric of spacetime around itself, like a bowling ball lying on a stretched out bed sheet. Early in their work on the movie, with the black hole encircled within a rich field of distant stars and nebulae instead of an accretion disk, the team found that the standard approach of using just one light ray for one pixel in a computer code—in this instance, for an IMAX picture, a total of 23 million pixels—resulted in flickering as the stars and nebulae moved across the screen. Co-author of the study and chief scientist at Double Negative, Oliver James, said: “To get rid of the flickering and produce realistically smooth pictures for the movie, we changed our code in a manner that has never been done before. Instead of tracing the paths of individual light rays using Einstein’s equations—one per pixel—we traced the distorted paths and shapes of light beams.” Co-author of the study Kip Thorne said: “This new approach to making images will be of great value to astrophysicists like me. We, too, need smooth images.” Oliver James continued: “Once our code, called DNGR for Double Negative Gravitational Renderer, was mature and creating the images you see in the movie Interstellar, we realised we had a tool that could easily be adapted for scientific research.” In their paper, the team report how they used DNGR to carry out a number of research simulations exploring the influence of caustics—peculiar, creased surfaces in space—on the images of distant star fields as seen by a camera near a fast spinning black hole.   “A light beam emitted from any point on a caustic surface gets focussed by the black hole into a bright cusp of light at a given point,” James continued. “All of the caustics, except one, wrap around the sky many times when the camera is close to the black hole. This sky-wrapping is caused by the black hole’s spin, dragging space into a whirling motion around itself like the air in a whirling tornado, and stretching the caustics around the black hole many times.” As each caustic passes by a star, it either creates two new images of the star as seen by the camera, or annihilates two old images of the star. As the camera orbits around the black hole, film clips from the DNGR simulations showed that the caustics were constantly creating and annihilating a huge number of stellar images. The team identified as many as 13 simultaneous images of the same star, and as many as 13 images of the thin, bright plane of the galaxy in which the black hole lives.   These multiple images were only seen when the black hole was spinning rapidly and only near the side of the black hole where the hole’s whirling space was moving toward the camera, which they deduced was because the space whirl was ‘flinging’  the images outward from the hole’s shadow edge.  On the shadow’s opposite side, where space is whirling away from the camera, the team deduced that there were also multiple images of each star, but that the whirl of space compressed them inward, so close to the black hole’s shadow that they could not be seen in the simulations.

Follow CQG+ by entering your email address in the ‘follow’ box at the foot of this page. Followers of CQG+ enjoy regular updates from the site at a schedule of their choosing and can unsubscribe at any time.