Nils Andersson is Head of the Southampton University Gravity group. He is mainly focussed on problems involving the modelling of neutron stars and understanding various related astrophysical phenomena, from pulsar glitches to magnetar giant flares. Away from the office, he writes science-inspired books for kids and occasionally blows his own trumpet in public.

Each and every trade has its favourite tools, some more powerful than others. A plumber would not get by without a good wrench, a carpenter needs a hammer, a mechanic a screwdriver and so on. Theoretical physicists prefer action principles.

This preference is natural given that many of the phenomena we are interested in are associated with deviations from some minimum energy equilibrium state. It is well known that, once you understand a problem from the variational point-of-view, you have a very powerful tool at your hands. However, it is also generally accepted that this approach is restricted to conservative systems.

Our recent paper in Classical and Quantum Gravity challenges this consensus view. Working in the framework of classical general relativity (no extra dimensions and fancy stuff here!), we develop a new framework that allows us to account for – at least in principle – a range of dissipation channels in a complex fluid system. This development follows nearly three decades of effort on relativistic fluid dynamics, including superfluidity, elasticity and electromagnetism – the kind of systems you need to understand if you want to model neutron stars in detail.

The basic ideas behind this work are quite simple (although possibly heretical). First we treat the entropy (which incorporates the heat) as a separate “fluid” component. This should be acceptable provided you are working in the appropriate long-wavelength limit for phonons and other thermal excitations. Besides, previous work has shown that this approach leads to a stable and causal formulation for heat flow, a notoriously tricky problem in relativity. The basic premise of our approach is that heat carries energy and hence has inertia. 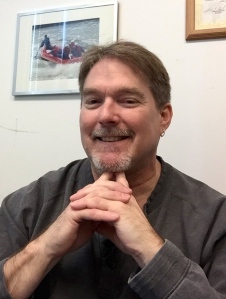 Greg Comer is a faculty member with Saint Louis University. He is interested in the thermodynamics and statistical mechanics of general relativistic systems such as black holes, neutron stars, and fluids in cosmology. Although mild-mannered professor by day, he spends nights channelling Stevie-Ray Vaughan with his beloved Stratocaster guitars.

The second key ingredient in the model is the notion of a “matter space” and an associated convective variation. This idea is familiar from elasticity theory where one tracks the deformation of each matter sample relative to an unstrained reference state. In the standard fluid picture, dating back to work by Taub in the mid-twentieth century and then more recently by Carter, one constructs a conserved particle flux in spacetime from a closed volume-form in the lower dimensional matter space. At first this may seem like mathematical overkill, but once you get used to the idea you realize that it allows you to generalize the model to multi-component systems (superfluids and so on) very easily (at least conceptually!).

In our new picture, we alter the matter-space model in a very subtle way. We simply allow the different matter spaces to interact and demonstrate how this leads to the presence of dissipative terms in the fluid equations. We discuss the problem step-by-step, allowing for more complex “interactions” and finally (after quite a lot of hard work) arrive (perhaps somewhat ironically) at a formulation one might have guessed in the first place. Of course, this is not guesswork. We have a rigorous derivation, which should lead us to a deeper understanding and ultimately a natural connection with the relevant micro-scale physics. This seems like excellent progress on a very hard problem.

Of course, it may be that this new approach is more sleight-of-hand than genuine breakthrough. Perhaps it even depends on your point of view. What is clear is that we have introduced some genuinely new ideas which – as discussed in the paper – promise to guide future work on dissipation in general relativistic systems. There may still be a lot of work to do, but at least we now have a new set of tools and a better sense of where they can be applied.