Jelle Hartong is a postdoctoral researcher at the Université Libre de Bruxelles. His research concerns the foundations and applications of various non-AdS holographies and non-relativistic gravity.

Relativistic, Poincaré invariant, field theories are defined on Minkowski space-time. This flat background can be turned into a curved geometry by coupling the theory to a Lorentzian metric as one does when adding matter to Einstein’s theory of gravity. There are many areas of physics, notably holography and condensed matter physics, where the field theories of interest are non-relativistic, for example Galilean invariant. These theories cannot be defined in a Minkowski space-time or its curved analogues but they require the introduction of a so-called Newton–Cartan (NC) space-time. Recently, there has been a revival of interest in Newton–Cartan geometries since they occur in recent studies of holography and condensed matter physics. One of the novel insights is that torsion plays a crucial role in both holographic realizations of NC geometries and in field theories coupled to curved NC backgrounds. In this paper we worked out the geometrical properties of Newton–Cartan geometries with torsion enabling one to couple field theories to curved (and flat) Newton–Cartan geometries as well as to setup a boundary covariant description of Lifshitz holography. 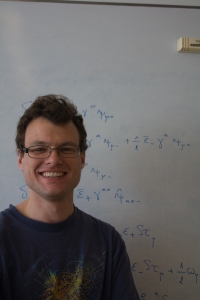 Jan Rosseel is a postdoctoral researcher at the Technische Universität Wien. His research interests lie in the fields of supergravity, three-dimensional (higher spin) gravity and recently non-relativistic gravity.

In holography, for space-times that are not asymptotically Anti-de Sitter (AdS) one often encounters non-relativistic symmetry groups near the boundary. This is for example the case for Lifshitz, Schrödinger and flat space holography. One can study the boundary theory by trying to find out what the boundary geometry is. In the case of Lifshitz holography this turns out to be related to understanding what happens with the light cones, i.e.~the tangent space symmetries, when approaching the boundary of a Lifshitz space-time. For example, one can show that the Lorentzian tangent space structure that is present in the bulk of the geometry contracts to a Galilean light cone structure as one approaches the boundary where the ultraviolet sector of the dual field theory lives. One can then understand the boundary geometry from applying a notion of Einstein’s equivalence principle but with the Poincaré algebra replaced by the Galilei algebra, or rather its central extension, the so-called Bargmann algebra, in order to account for mass. Since in holography the boundary geometry is defined up to a local rescaling of the boundary Vielbeine the local symmetry structure is that of the Bargmann algebra plus dilatations, i.e.~of the Schrödinger algebra.

When coupling a relativistic field theory to a background geometry we can compute the energy-momentum tensor by varying the metric. In the case of a non-relativistic field theory on a Newton–Cartan space-time we can compute the energy-momentum tensor and mass current by varying the Newton–Cartan fields. These fields consist of Vielbeine whose variation gives rise to the energy-momentum tensor and an additional vector field that couples to the mass current. Note that in a non-relativistic setting mass and energy are no longer equivalent which is why there is a mass current on top of the energy momentum tensor. In order to compute quantities such as the energy current we need to vary the timelike Vielbein of NC geometry without imposing any constraints on it. This is only possible when adding torsion to the geometry. Hence the torsionful extension of Newton–Cartan geometry, which is called torsional Newton–Cartan (TNC) geometry, is crucial to discuss a field theory on NC space-time. In this paper we show that the gauging of the Schrödinger algebra naturally leads to a TNC geometry and that this is the way the TNC geometry emerges within the context of Lifshitz holography.

Eric Bergshoeff occupies a `Willem de Sitter’ Chair in Theoretical Physics at the University of Groningen and is Director of the Van Swinderen Institute for Particle Physics and Gravity. His research interests concern supergravity, branes, string theory and, more recently, non-relativistic gravity.

A neat way of describing non-relativistic geometries covariantly is via the so-called gauging of non-relativistic space-time symmetry algebras. This is inspired by how General Relativity’s Lorentzian curved geometry in the Vielbein formulation can be seen as a gauging of the Poincaré algebra. In this approach, the Vielbein and spin connection are identified as gauge fields associated to the translations and Lorentz rotations of the Poincaré algebra. The spin connection is however not an independent gauge field, but instead depends on the Vielbein. This dependency is expressed via the so-called torsion constraint, that in gauge-theoretic language is given by constraining the components of the gauge field strength along the translation generators to be zero.

A similar strategy has been employed to show that Newton–Cartan geometry in the absence of torsion, can be obtained via a gauging of the Bargmann algebra, i.e.~the central extension of the Galilei algebra of non-relativistic space-time symmetries. The inclusion of the central charge is crucial, as it allows one to introduce non-relativistic analogues of the torsion constraint that determine how the spin connections of spatial rotations and Galilean boosts depend on the other gauge fields. The gauging of the Bargmann algebra then yields a description of torsionless Newton–Cartan geometry in terms of Vielbeine and a central charge gauge field, that is equivalent to Cartan’s original formulation.

For holographic applications, torsionless Newton–Cartan geometry, as described via a gauging of the Bargmann algebra, is not sufficient. Indeed, as already mentioned above, in holography, the boundary geometry is only determined up to local dilatations and the relevant local symmetries are those of the Schrödinger algebra, i.e.~the conformal extension of the Bargmann algebra. The Schrödinger algebra is characterized by a number

, called the dynamical exponent, that parametrizes how time and spatial translations scale differently under dilatations. In our recent work, we have studied the geometrical structure that arises from gauging the Schrödinger algebra, for arbitrary values of

. In particular, our results show that this geometry is given by a Newton–Cartan geometry with torsion. The torsion is intimately linked to the presence of dilatation invariance. The same torsional Newton–Cartan geometry was previously encountered in Lifshitz holography and our result thus indicates that the boundary geometry that appears in Lifshitz holography is characterized by local Schrödinger symmetries.

Equipped with a solid understanding of the geometry of TNC space-times one can start thinking about many applications. For example, one can think about effective field and fluid descriptions of non-relativistic field theories in the area of condensed matter physics. In another direction one can consider the dynamics of TNC geometries which has recently been shown to correspond to Hořava–Lifshitz gravity. Finally, the lessons learned in Lifshitz holography might also help to understand such interesting cases as Schrödinger and flat space holography. For example, in the latter case the so-called Carroll algebra is expected to play an important role. This algebra is a close cousin of the Galilei algebra, obtained by sending the speed of light to zero. For the case of 3-dimensional bulk asymptotically flat space-times the boundary geometry is 2-dimensional in which case the Carroll algebra is isomorphic to the Galilei algebra. This makes the results of this work of potential interest to flat 3D holography.