Jade Powell is a PhD student at the University of Glasgow

A careful analysis of detector noise is necessary to determine whether a real gravitational-wave signal exists in the data of Advanced LIGO and Virgo. Instrumental and environmental disturbances can produce non-astrophysical triggers in science data, so called “glitches”. These glitches may reduce the duty cycle of the interferometers, and they could lead to a false detection if they occur simultaneously in multiple detectors. In the initial science runs of LIGO and Virgo a glitch could be classified by looking at an image of its time series waveform or spectrogram. This proved to be a slow and inefficient method for characterising a large number of glitches. To solve this problem the detector characterization team proposed a challenge for the fast automatic classification of glitches in advanced detector data as a good understanding of the detector noise will be critical for a confident first gravitational-wave detection. 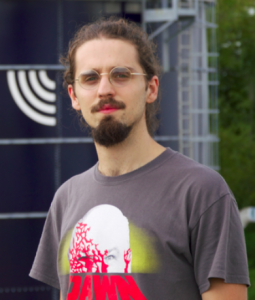 Daniele Trifirò is a masters student at the University of Pisa.

Our paper, published in Classical and Quantum Gravity, investigates methods for fast, automatic classication of glitches, in order to help provide valuable clues for identifying their sources, and possibly lead to their elimination. We developed three different methods for the fast classification of glitches that appear in advanced LIGO and Virgo data. They are Principal Component Analysis for Transients (PCAT), an adaptation of LALInference Burst (LIB), and a combination of a trigger generator, called Wavelet Detection Filter, and Machine Learning techniques (WDF-ML).

Elena Cuoco is a researcher at the European Gravitational Observatory

An example scatter plot of the first two principal component coefficients, for all the glitches that PCAT found in ∼3 hours of data, are shown in Figure 1. Glitches that belong to different types are separated in the principal component parameter space. PCAT applies a machine learning classifier to the coefficient values to sort the glitches into different types. Gravitational-wave detector data includes multiple auxiliary channels, which are not sensitive to gravitational waves, and provide important information about the environment and other degrees of freedom in the advanced detectors. The number of possible auxiliary channels may be very large, which makes machine learning an ideal tool for this type of classification, due to the speed at which machine learning methods can process a large volume of detector data. If a glitch occurs in the gravitational-wave channel in time coincidence with an auxiliary channel, it can help us to identify the cause of the glitch type.

Figure 1 – The figure shows the first two principal component coefficients for all of the glitches found by PCAT in ∼ 3 hours of data. The red and black dots show two different types of glitches, which are well separated in the coefficient parameter space.

The principal components, and their corresponding coefficients, can also be used to reconstruct the waveforms of glitches found in the data. An example of a glitch waveform, reconstructed using five principal components, is shown in Figure 2. LIB uses a linear combination of the first few principal components, created from known glitch types, to create signal models for different populations of glitches. By using a technique known as nested sampling to find the coefficient values needed to reconstruct the glitch, LIB can use Bayesian model selection to determine the type of glitch found in the data. WDF-ML reconstructs the glitch waveforms using multiple types of wavelets. The same machine learning classifier that is used by PCAT is then applied to the corresponding wavelet coefficients for classification.

Figure 2 – The blue waveform is the whitened and high passed gravitational-wave data containing a glitch. The red line is the waveform reconstructed by PCAT using five principal components. 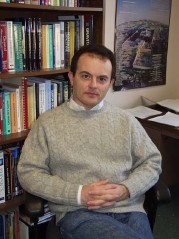 Marco Cavaglià is an associate professor at the University of Mississippi

To test the performance of these new methods we created three artificial data sets designed to simulate advanced LIGO Gaussian noise containing different populations of glitches. We show that all three methods can classify transient waveforms in gravitational-wave detectors with a high level of efficiency. The algorithms can classify glitches by waveform morphology alone, or into further sub-types by frequency and SNR. In future studies we aim to compare the algorithms when using real glitch populations and multiple auxiliary channels.