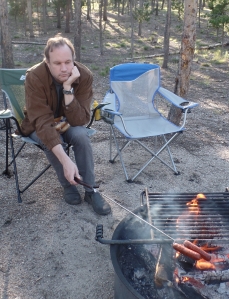 A few assumptions regarding life and technology translate into new cosmological solutions.

For the universe as a whole, will the next several billion years be any different from the last several billion years? What kinds of things could make it different? Something like a phase transition or a big rip would definitely break up the monotony, but that kind of thing seems unlikely to happen any time soon. Barring that, we can expect cosmic acceleration to push a bit harder, galaxies to get a bit dimmer, black holes to get a bit fatter.  It’s mostly a boring, predictable, stable time for the cosmos.

Then again, there is something a little different happening now. It hardly seems worth mentioning. It takes a while for the universe to produce enough heavy elements to form earthlike planets. And then, judging by our experience on the Earth, it takes several billion more years to evolve intelligence on them (if it happens at all). The universe was also much more dangerous for evolving life, a few billion years ago. So, accounting for the delays, we’re somewhat new to the era of advanced life.

But what does the large-scale universe care if something occasionally crawls out of the mud with just enough brain power to comprehend physics? Some of us are guilty of ignoring tiny, inconsequential details like Galaxy Superclusters when writing down cosmological models — why should life be more than an idle diversion for a cosmologist?  Consider three plausible technologies:  1) Artificial general intelligence 2) High-speed space travel  3) Self-reproducing spacecraft.  If these are practical, they suggest that the universe could suddenly find itself completely saturated with advanced intelligence, even if it appears quite rarely. For a wide range of possible final goals, it has been argued that rational agents are likely to deploy such technology and rapidly expand. And even if just a small fraction of intelligent life chooses to do so, the conclusion remains much the same.

Now consider a more exotic technology. Suppose it is possible to harness Hawking radiation from small, artificially created black holes to power a heat engine, converting the mass of ordinary matter into work and waste radiation, bypassing the limits of technologies like nuclear fusion (fusion seems like a great way to exploit

until you end up with a pile of iron). If it can be done, it will be done, and throughout a life-saturated universe. Accessing a massive reserve of free energy should be a prime instrumental goal for almost any final goal that an ambitious rational agent could possess. This would result in a tremendous amount of waste heat radiation, as ordinary matter is “burned” everywhere that life is active.

Suddenly, it is at least conceivable that the universe is entering a period of interesting (and highly modelable) times. Depending on where the practical limits to technology reside, the universe could once again be filled with radiation, and thus pressure, inducing a backreaction on the scale factor. It is possible that we have completely misjudged the significance of life to the universe. Intelligent life may be the universe’s large-scale, general-purpose tool for seeking out and minimizing deeply hidden reserves of free energy.

In other words, the universe may be entering a kind of phase transition after all, complete with its own nucleation events, spherically expanding domains, and latent heat. But it’s not the result of hidden physics taking us by surprise. We are the transition.