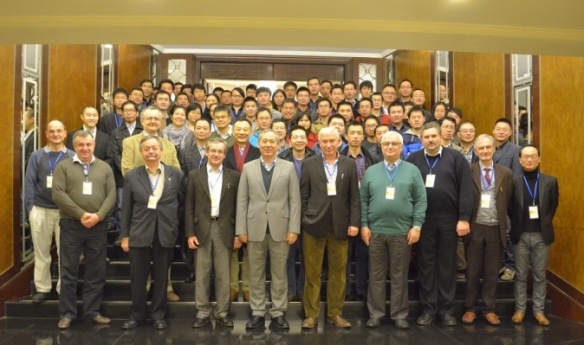 Attendees at the third workshop on the TianQin science mission

Gravitational waves can paint a completely new picture of the Universe. Promising advances in technology may make it possible to detect the minute wobbling of spacetime in the next few years. Estimates show that ground-based gravitational wave detectors, such as Advanced LIGO (Laser Interferometer Gravitational-wave Observatory) or Advanced Virgo will probably see several hundred events by 2020. These ground-based instruments will be complemented by space-borne detectors. These are sensitive to a much richer set of sources, including compact binary star systems in our own Milky Way, supermassive black holes consuming stars, and binary supermassive black holes in distant galactic nuclei. Dozens of proposals have been put forward for space-borne gravitational wave detectors, among which the most studied are LISA (Laser Interferometric Space Antenna) and its evolved version, eLISA. The European space agency has picked “Gravitational Universe” as the science theme for its 3rd large science mission L3; if chosen, eLISA might be launched in 2034.

In our paper, we describe the preliminary concept of a newly proposed space-borne gravitational wave detector, TianQin. In old Chinese legend, the lives of the gods in heaven are very similar to the lives of people on the ground (apart from the fact that they can fly, perform other miracles, and are presumably much happier). They also play music using instruments such as a Chinese zither. A zither on the ground is called “Qin”, and one in heaven is “TianQin”. Bearing this name, our experiment is metaphorically seen as a zither that is being played by Nature herself through gravitational waves.

Unlike other proposals, TianQin is not expected to be a full scale gravitational wave observatory. Instead, TianQin is only required to make a convincing detection of gravitational waves from one preselected source. (Any additional detection or observation will be viewed as a bonus. ) Such a focused goal makes it possible to concentrate on noise sources within a relatively narrow frequency band, and this is expected to help significantly reduce the technology challenges. This effort is extremely important because it helps lay the foundation for building full-scale gravitational wave observatories in the future.

Due to its special scientific objective, the first problem for TianQin is to identify the gravitational wave source that will be the main target of the experiment. Our preliminary investigations are based on the numerous prior studies that were conducted for LISA. These studies have identified a set of ultra-compact galactic binaries (known as LISA verification binaries) that can be used to verify the performance of the proposed eLISA instruments. TianQin is sensitive to the same frequency range, and so the LISA verification binaries are natural candidates as TianQin reference sources. At the moment, RX J0806.3+1527 (also known as HM Cancri or HM Cnc) stands out as the best choice, due to its orbital period that is the shortest known to date for a binary system, its relative proximity to the Sun and its moderate component masses.

The second question addresses the orbit that will be used for the TianQin spacecraft. Like eLISA, TianQin will comprise three spacecraft, each carrying laser transceivers on board. For an experiment of this nature, a heliocentric orbit is preferred, keeping instruments far away from the complex gravitational environment of the Earth-Moon system. The orbital plane of LISA (and eLISA) is also kept at a fixed angle relative to the Sun, so the thermal load on the satellites varies only annually. On the other hand, it is expensive and time-consuming to send satellites into heliocentric orbits. It is also challenging to track, control, and to communicate with heliocentric satellites. Given the focused goal of TianQin, we chose geocentric orbit in the preliminary mission concept. This choice makes it possible to rely on more accessible satellite technologies.

A constellation of satellites used for gravitational wave detection is characterized by the arm length, the distance between any two satellites that exchange laser signals. In order to have a large enough armlength but to avoid too much influence from Moon, the orbital radius is chosen to be about 100,000km for the TianQin satellites. The corresponding orbital period is about 3.6 days. A serious concern is that this will lead to excessive variation in the thermal load on the instruments due to uneven solar exposure as the spacecraft complete their orbits. This problem is mitigated by placing the satellites in an orbit that is perpendicular to the plane of the ecliptic. Fortunately, this also maximizes the response of the satellite system to a source such as RX J0806.3+1527 that lies in the direction of the ecliptic plane. In this configuration, there are windows in time lasting several months, during which the Sun is at a large angle relative to the detector plane, reducing the thermal impact on the experiment.

An illustration of the preliminary concept of TianQin, with RX J0806.3+1527 being the reference source

By choosing geocentric orbits, we can pay more attention to the development of other demanding technologies like laser interferometry and disturbance reduction. In the preliminary mission concept, the primary mission objective is convincing detection of the source RX J0806.3+1527 within a three-month observational window. The distance to this source is not known precisely. If its actual distance is at the higher end of the estimated range, it sets extremely challenging sensitivity requirements for TianQin.

The TianQin project already involves more than a dozen institutes and more than fifty scientists and technologists, both from inside and outside China. More are expected to join in as time progresses. We are also working to make TianQin an international effort.