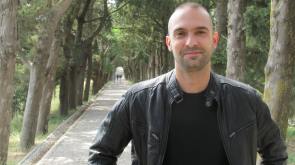 The primordial curvature perturbations are so relevant today for current observations since these capture the information about the primordial Universe at the time inflation took place. During the inflationary era, the Hubble horizon started to shrink very rapidly and at some point the primordial curvature perturbations exited the horizon. In most models of inflation these modes froze after the horizon exit, and hence these evolved unaltered in the Universe, carrying all the information for the inflationary era. After the inflationary era, the Hubble horizon started to expand during the radiation and the matter domination era, because the Universe expanded in a decelerating way, and at some time instance the primordial perturbations reentered the Hubble horizon. This is the exact reason why these are so significant for present time observations. After the matter domination era, the deceleration to acceleration transition occurred and therefore the so-called late-time acceleration era begun.

Hence the challenge in modern theoretical cosmology is to describe in a successful and unified way the early and late-time acceleration eras and also the intermediate eras, that is, the radiation and matter domination eras. In our recent CQG paper with Prof. S. Odintsov we provided a theoretical model which approximately described all the evolution eras of the Universe, and also it also described a smooth transition between these eras. We found the approximate F(R) gravity description which could generate each era and also we proved that the behavior of the effective equation of state is the desirable one.

Our model contained two timelike Type IV singularities, which are not crushing type singularities, like the Big Rip or the initial singularity. This means that the Universe can smoothly pass through these singularities without having the catastrophic crushing consequences of a crushing timelike singularity. The first singularity was chosen to occur at the end of the inflationary era, and the second at the end of the matter domination era. The existence of the soft singularities guaranteed a smooth transition to each era, and also the singularity occurring at the end of the matter domination era actually marked the time that the deceleration-acceleration transition occurred. Moreover, near the second Type IV singularity, the effective equation of state parameter w, continuously deformed from w=0, which characterizes the matter domination transition to a negative number, which clearly characterizes a quintessential acceleration era. Furthermore, a direct calculation of the observational indices related to the inflationary era showed that our model produces a nearly scale invariant and red tilted power spectrum, which is compatible to the 2015 Planck observational data. Thus our model has three appealing features, namely, it provides a unified description of all the evolution eras of our Universe, it is 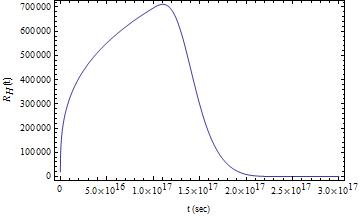 The Hubble radius as a function of cosmic time for the unification model.

compatible with the observational data, and the Hubble horizon evolution agrees with the expected qualitative picture. Particularly, the initial challenge when we started discussing this project was to find a model which can produce the correct qualitative behavior for the Hubble radius. Particularly, the Hubble radius should initially decrease exponentially, during the inflationary era, then expand during the deceleration eras, that is during the matter and radiation domination eras, and finally it should shrink again during the late-time epoch. In our model, the Hubble horizon behaves as in the figure (taken from the published article). As it can be seen, the Hubble horizon evolves in the desired way and intriguingly enough the deceleration to acceleration transition occurs very near to the time instance that the second singularity occurs. The ultimate challenge is to find an exact analytic modified gravity description of the cosmic evolution we proposed with our model, which is a difficult but not unsolvable problem.