Daniele Oriti is a senior researcher and group leader at the Max Planck Institute of Gravitational Physics (Albert Einstein Institute) in Potsdam, Germany, EU. Born and educated in Italy, got a PhD from the University of Cambridge, UK, and held research position at Cambridge, Utrecht University, The Netherlands, and the Perimeter Institute for Theoretical Physics, Canada. He lives and plays with physics, philosophy, and the rest of the universe, in Berlin, with his wife and son.

In this Insight, the fundamental building blocks of quantum spacetime are described by peculiar quantum field theories, then assembled to form continuum geometries, to explain the dynamics of the early universe and black holes from first principles.

Daniele Oriti is a senior researcher and group leader at the Max Planck Institute of Gravitational Physics (Albert Einstein Institute) in Potsdam, Germany.

What is space made of? What are its fundamental building blocks? Can we play with them? And what can we make out of them?

If these sound like a bunch of childish questions, it is because theoretical physicists manage to remain the children they once were for some time longer; and to make a living by asking childish questions and playing with the mathematical toys that accompany them.

The serious, only-for-adults part of the story is that we have learned from General Relativity that space and time are physical entities, so it is actually reasonable to ask if they have a microstructure. Moreover, we have several hints (e.g from black hole physics and cosmological singularities) that the continuum geometric description of spacetime on which General Relativity is based should give way to one in terms of discrete, non-geometric degrees of freedom. This is the goal of quantum gravity: a quantum theory of the microstructure of space and time, to understand their discrete non-geometric building blocks and how the usual continuum description arises in some approximation.

Modern approaches to quantum gravity are achieving just that. Loop quantum gravity, for example, identifies spin networks as the structures underlying space (and their interaction processes, spin foams, as underlying spacetime): purely combinatorial objects, graphs, labeled by algebraic data, i.e. group representations. The continuum world populated by continuum fields would then emerge from the microscopic interactions of such combinatorial and algebraic entities; how, exactly? this is the great outstanding challenge of this approach.

Our recent CQG article [1] provides a new intuitive and mathematical understanding of the same entities, and a new tool for tackling the emergence of the continuum. 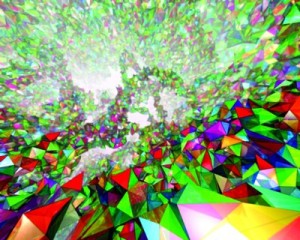 We show that the spin networks of loop quantum gravity are special many-body states in a 2nd quantised Fock space whose quanta are created/annihilated by suitable field operators, and that every loop quantum gravity observable (quantum geometric observables, like area and volume operators, and any Hamiltonian constraint encoding the quantum dynamics) have a 2nd quantised counterpart acting on the same Fock space. The quanta populating this Fock space, i.e. the newly identified building blocks of space, are the chunks of the spin networks associated to the vertices of the graphs supporting them. The Fock space formed by these “atoms of space” is exactly the Hilbert space underlying the so-called group field theory (GFT) formalism [2]. Further, one can show that, starting from a formal partition function for spin networks in terms of the Fock space, and any given Hamiltonian constraint operator, this corresponds to a group field theory with a specific classical action. While the correspondence between group field theories and spin foam models was known, with the latter arising as the Feynman amplitudes of the former, these results prove that there is a direct correspondence between group field theory and loop quantum gravity also at the operator-state level: the first is truly a 2nd quantised reformulation of the second.

OK, so we have the building blocks. This is where one really starts playing! The game is to reconstruct space(time) as we know it, piece by piece. We need to construct large assemblies of the building blocks (large numbers would generically be needed to have an approximate continuum) that resemble continuum spaces of physical interest, and compute their properties from the microscopic theory, to see if they match what we know from General Relativity and the rest of continuum physics, and if they suggest new observable aspects of the world.

This is the game our group is busy playing: a fun collective effort, involving a variety of
mathematical and physical tools, and, like most games, some imagination and ingenuity! It is exactly to play this game that group field theory and a 2nd quantised Fock space are useful.

We explored in detail the idea of the universe being a quantum fluid, a condensate of the microscopic GFT building blocks [3]. The results are striking [4]. A generalised form of Friedmann equations (the basis of cosmology in General Relativity) emerges as part of the hydrodynamics of such condensate! Moreover, the quantum corrections coming straight from the fundamental theory replace the classical cosmological singularity with a quantum bounce.

Generalised condensate states can be used also to model black hole horizons, and to compute their thermodynamic properties from those of the microscopic building blocks, including the Bekenstein-Hawking entropy! [5]

More surprises are certainly in store. There are many aspects of our world that we aim to unravel or to explain from this new perspective. But this is for the adults we pretend to be. For the children we secretly are, the only important thing is to keep playing. So, let us play (and join us)!