Written by Geoffrey Compère, a Research Associate at the Université Libre de Bruxelles. He has contributed to the theory of asymptotic symmetries, the techniques of solution generation in supergravity, the Kerr/CFT correspondence and is generally interested in gravity, black hole physics and string theory. 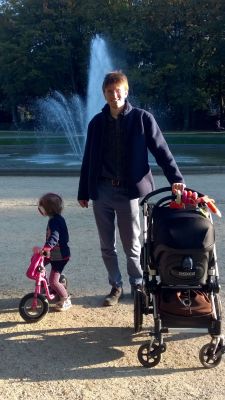 Geoffrey Compère having family time in the park Le
Cinquantenaire in Brussels.

“Black hole have no hair.” This famous quote originates from John Wheeler in the sixties. In other words, a stationary black hole in general relativity is only characterized by its mass and angular momentum. This is because multipole moments of the gravitational field are sources for gravitational waves which radiate the multipoles away and only the last two conserved quantities, mass and angular momentum, remain. That’s the standard story.

Now, besides gravitational waves, general relativity contains another physical phenomenon which does not exist in Newtonian theory: the memory effect. It was discovered beyond the Iron Curtain by Zeldovich and Polnarev in the seventies and rediscovered in the western world and further extended by Christodoulou in the nineties. While gravitational waves lead to spacetime oscillations, the memory effect leads to a finite permanent displacement of test observers in spacetime. The effect exists for any value of the cosmological constant but in asymptotically flat spacetimes, it can be understood in terms of an asymptotic diffeomorphism known as a BMS supertranslation.

In order to understand that, let’s go back to the sixties where the radiative properties of sources were explored in general relativity; it was found by Bondi, van der Burg, Mezner and Sachs that there is a fundamental ambiguity in the coordinate frame at null infinity. Most expected that only the Poincaré group would act on all physical fields but it turned out that there is an additional set of diffeomorphisms that cannot be fixed and which is relevant for describing the gravitational field: the supertranslations. Now it turns out that the memory effect exactly corresponds to a supertranslation of physical observers, which is a measurable effect, potentially by LIGO.

So, there is something physical about supertranslations. But what exactly? Another important element is that in order to define a complete set of canonical variables around null infinity (or perform the so-called asymptotic quantization of the gravitational field), the Bondi mass and its conjugate are not enough. The supertranslations don’t act consistently as realized by Strominger and collaborators recently. One needs an additional field which is well defined in nearly stationary configurations, at past or future times, and which I call the supertranslation field. This is the field which linearly transforms under supertranslations and which only depends upon the sphere coordinates.

So, there is a canonical variable at null infinity which encodes the state of the supertranslation field and linearly transforms under it. So what? First, one could argue that it is a pure coordinate effect. The difference of supertranslation field between two stationary configurations encodes the transient processes that took place in between and encode all memory effects; so that’s definitely physical. But the absolute field itself, not its differences, is it physical? Let’s think of momentum: it transforms under boosts, so it is coordinate dependent. Yet, a lot of physics depends on momentum, especially once there are several objects with different momenta. This might be similar for the supertranslation field. Given two objects, for example a black hole and the earth which are each surrounded by a respective null infinity, it might make sense to talk about the relative supertranslation field. Isn’t it? Well, I don’t know for sure. What is clear is that it is a classical concept, rooted in the metric, and not a quantum variable so at least we can discuss classical GR. 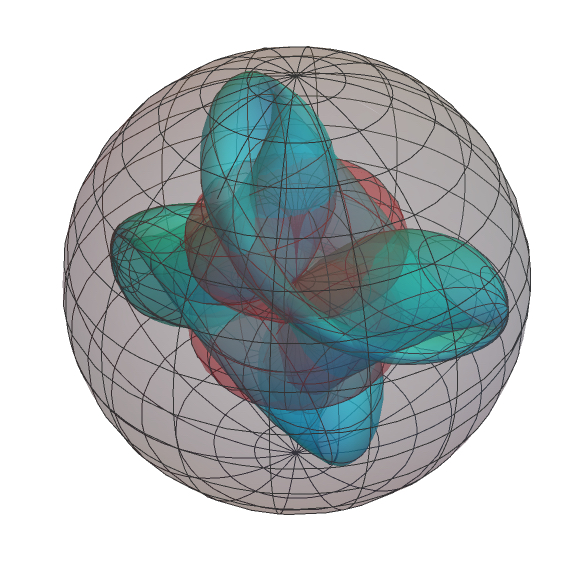 Supertranslation horizon inside the event horizon of the Schwarzschild black hole

This is where a new concept arises: superrotations. There is an extension of the Lorentz algebra which has been proposed by Barnich and Troessaert and which consists of superrotations. Finite superrotations are bad: they lead to pathologies: negative energy, infinite charges and other unphysical features. But infinitesimal superrotations are useful probes of physical configurations. It turns out that superrotation charges are well-defined and finite when the supertranslation field is turned on, as far as I can tell. So, we have a set of conserved charges which allow to characterize the non-trivial features of the vacua and black holes. The key point is that since these charges are conserved at any radius and finite, there ought to be a source for them in the bulk, beyond the last region where we can define them, I mean, at the boundary of the largest coordinate system at our disposal which I called the supertranslation horizon.

Now, what we did is to build the representations of the BMS group starting with either Minkowski or Schwarzschild. We generated their orbit under BMS and obtained a nice closed form expression for their metric. That was the hard technical step. We then noticed that the superrotations charges are non-trivial and infinitesimal superrotations are symplectic symmetries, which points to the existence of a source which lies beyond the supertranslation horizon. What is the source? I don’t know but the existence of these charges is enough to infer its existence. If one could shrink the surface of integration to a point, the charge would be zero so there is an obstruction to do so.

An interesting question in the black hole case is what is the respective location of the Killing horizon or infinite redshift surface and the supertranslation horizon. After our analysis which contains an important caveat, we concluded that the null energy condition implies that the supertranslation horizon lies inside the Killing horizon. We found exactly the non-linear constraint that we need for that purpose from the global angle-dependent energy conservation at null infinity. So any source for the superrotation charge would be hidden inside the event horizon. Finally, that leads to the picture that the Schwarzschild black hole is not unique. One could apply a supertranslation diffeomorphism which is singular inside the event horizon which lead to additional hair for the black hole: superrotation charges.

If you want to know the details, and the simpler three-dimensional analogue, check our paper!