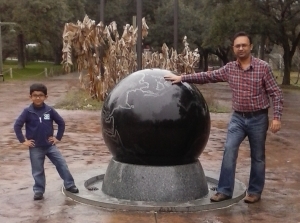 Parampreet Singh with a young student who often asks him the most difficult and so far unanswerable questions on the resolution of singularities. Dr Parampreet Singh is Associate Professor at Department of Physics and Astronomy at Louisiana State University.

Einstein’s theory of classical general relativity breaks down when spacetime curvature
becomes extremely large near the singularities. To answer the fundamental questions
about the origin of our Universe or what happens at the central singularity of the black holes thus lies beyond the validity of Einstein’s theory. Our research deals with discovering the framework which guarantees resolution of singularities.

About a decade ago, one of the very first rigorous quantizations of a cosmological spacetime in loop quantum cosmology was performed. Along with my collaborators, we were able to show that non-perturbative quantum gravitational effects as understood in loop quantum gravity replace the classical big bang with a big bounce [1]. The primary reason deals with the properties of quantum geometry as found in loop quantum gravity. Kinematical operators such as area of a surface or volume of a region have discrete eigenvalues. Classical differential geometry is replaced by a discrete quantum geometry. Classical continuum spacetime emerges when spacetime curvature becomes small compared to Planck scale. However, near the Planck scale the physics of quantum spacetime is very different from the classical spacetime. Quantum geometric discreteness effectively makes gravity repulsive, causing a collapsing spacetime approaching an inevitable singularity to bounce.

To understand genericness of singularity resolution in this homogeneous setting, these results needed to be generalized in two directions: inclusion of spatial curvature and of anisotropies. The generalization to isotropic models with spatial curvature was straightforward with similar results [5]. In contrast, the generalization to anisotropic spacetimes is tedious and till recently was performed for Bianchi-I spacetime where almost identical results appear [6]. All strong singularities are eliminated, and all weak ones are generally ignored for a wide class of matter content. However, interestingly it was recently  found that  a very mild non-existent weak singularity also gets resolved in a flat vacuum Bianchi-I spacetime [7].

The complexities increase when spatial curvature and anisotropies are present together, such as in the Kantowski-Sachs spacetimes which in absence of matter capture the Schwarzschild interior, or the Bianchi-IX model. The reason is tied to certain technical aspects of quantization due to richness of interplay of intrinsic curvature and anisotropic shear. The associated difficulties for long did not allow existing proofs for singularity resolution for the isotropic [4] and the Bianchi-I spacetime [6] to be extended further. In a work with my graduate student, Sahil Saini, which has recently appeared in CQG we have provided this crucial breakthrough for the Kantowski-Sachs spacetime with arbitrary matter content. We find that no strong singularities can exist in a  finite proper time evolution. Only weak ones can exist — which are harmless. The proof we present not only can be constructed for the isotropic and the Bianchi-I spacetime, providing an alternative to the previous ones [4,6], but is a promising approach for proving a generic resolution of singularities for all the homogeneous spacetimes in loop quantum cosmology.

This is just a beginning towards proving generic resolution of singularities. So far the results have been found in the homogeneous setting. The big challenge is to include inhomogeneities. The hope is that similar to the case in Einstein’s theory where results on singularities were first proved for homogeneous isotropic and anisotropic spacetimes, before the celebrated singularity theorems, perhaps the above results on the resolution of singularities provide the building blocks of a non-singularity theorem in quantum gravity.