Silence is a rare commodity in our everyday, technology-driven lives; from the outright blare of car horns in India, to the quieter, but persistent sounds of mobile phones in Germany, constantly alerting us to the incoming messages, to the 24 hour news cycle on Canadian TV. Finding a few quiet moments, unhindered by the constant onslaught of information requires a considerable effort. Indeed, it often feels that noise, not silence is the generic state of our world. 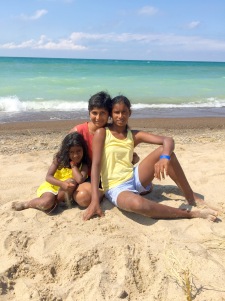 Sumati Surya is on the faculty of the Raman Research Institute, in Bangalore, India and is currently an Emmy-Noether visiting fellow at the Perimeter Institute, Canada. Although she loves the quiet she also loves the sounds created by her two very active and engaging daughters.

Astrid Eichhorn is currently an Emmy-Noether junior research group leader at the University of Heidelberg, where she and her group explore the fundamental quantum structure of spacetime and matter. When she isn’t exploring asymptotic silence in quantum gravity, she likes to look for silence in the colder more remote regions of our planet.

Imagine then a silence so deep that no sound nor signal can be communicated to someone who is no further than an atomic distance away from you. Such a deep silence may be at the heart of the quantum universe. Zooming in on the tiniest imaginable distances of about 10-35 m, the universe could become very quiet. The thesis of asymptotic silence is that at these distances, information takes significantly longer than expected to travel between points. Effectively, the universe becomes asymptotically silent.

In our paper, we explore the quantum structure of spacetime within causal set quantum gravity. The key idea of this approach is that spacetime – like matter – is fundamentally “atomic”. At tiny scales, spacetime consists of discrete “atoms of spacetime” which are causally connected, and form a causal network that constitutes the basic structure of our universe. In order for this network to look like continuum spacetime at large enough scales, the causal network of spacetime points must be random. For a random network, the probability to find at least one “atom of spacetime” in any given Planck-sized spacetime-volume is always finite. Thus the causal network encodes the information about the volume, through the number of its elements. This, together with the causal structure helps recover spacetime geometry.

Randomness is the key to asymptotic silence. Consider two spatially separated observers, who want to exchange information. In a continuum spacetime, they establish causal contact and can exchange information, as soon as their lightcones start to overlap. This singles out a codimension 2 hypersurface where the lightcones intersect.

Cartoon picture of asymptotic silence. Observers starting at space-like separated points A and B can come into contact when their lightcones intersect, for example at point C. In an asymptotically silent universe, the lightcones effectively shrink (blue), and hence the observers (red) could not reach each other until point D. Chalk work by Clément Delcamp.

In the causal, random network that underlies spacetime in the causal set approach to quantum gravity, the probability for a causal set element to lie in a lower dimensional hypersurface in the continuum is zero. The random discrete nature of spacetime results in a “lack of spacetime points” which then prevents two observers from establishing communication until later. Instead, the first causal contact between the two observers comes a little later, i.e., the exchange of information is delayed. This property, loosely speaking, is asymptotic silence.

So if you’re trying to escape from the noise of the world you can either travel to the remote mountains of Alaska, or find asymptotic silence in our paper!

Why do we care about asymptotic silence? The main reason is an intriguing connection between asymptotic silence and the dimensionality of quantum spacetime.  In an asymptotically silent spacetime, spatially nearby points “decouple” from other, and cannot establish causal contact. Therefore we lose track of some of the other spatial dimensions, and an asymptotically silent spacetime looks like it has effectively only two instead of four dimensions. In fact, many models of quantum spacetime exhibit a dynamical reduction of dimension.

With different approaches to quantum gravity and their respective proponents agreeing on almost nothing, the effective dimension of spacetime appears to be a point of contact. Quantum fluctuations of gravity render the effective spacetime two-dimensional, even though it is four-dimensional at large scales – reminiscent of a fractal. While causal set quantum gravity first appeared as a possible exception to this rule, as shown by Astrid and Sebastian in a previous paper, it turns out that dimension is in the eye of the beholder: different ways of measuring the dimension do not have to agree in quantum gravity – Again, this is similar to fractals. In fact, we show that while the spectral dimension, which is the dimension seen by a particle performing a random walk on a spacetime, becomes large at small distances in a causal set, another measure of dimension decreases, just as one would expect from asymptotic silence. Thus, a fascinating picture of quantum spacetime emerges, bringing to the fore an important question for future research: is all of this just mathematics, or is there an imprint of dimensional reduction in phenomenology? In other words, can we “hear” asymptotic silence by listening to what experimentalists have to tell us?

About our collaboration: Collaborating across three continents, we were definitely not asymptotically silent, with lots of communication from Canada across Europe to India. The Perimeter Institute emerged as a focal point for our geodesics: With Sumati and Astrid both holding Emmy Noether visiting fellowships, and Sebastian based there, major steps towards asymptotic silence where made at this definitely-not quiet institute in Canada!