The road from Dunsink to the exceptional symmetries of M-theory

By Leron Borsten and Alessio Marrani

Our journey starts in the fall of 1843 at the Dunsink Observatory[1], presiding from its hill-top vantage over the westerly reaches of Dublin City, seat to the then Astronomer Royal Sir William Rowan Hamilton. In the preceding months Hamilton had become preoccupied by the observation that multiplication by a complex phase induces a rotation in the Argand plane, revealing an intimate link between two-dimensional Euclidean geometry and the complex numbers ℂ. Fascinated by this unification of geometry and algebra, Hamilton set about the task of constructing a new number system that would do for three dimensions what the complexes did for two. After a series of trying failures, on October 16th 1843, while walking from the Dunsink Observatory to a meeting of the Royal Irish Academy on Dawson Street, Hamilton surmounted his apparent impasse in a moment of inspired clarity: rotations in three dimensions require a four-dimensional algebra with one real and three imaginary units satisfying the fundamental relations i2 = j2 = k2 = ijk = -1. The quaternions ℍ were thus born. Taken in that instant of epiphany, Hamilton etched his now famous equations onto the underside of Broome bridge, a cave painting illuminated not by campfire, but mathematical insight and imagination.  Like all great mathematical expressions, once seen they hang elegant and timeless, eternal patterns in the fixed stars merely chanced upon by our ancestral explorers. 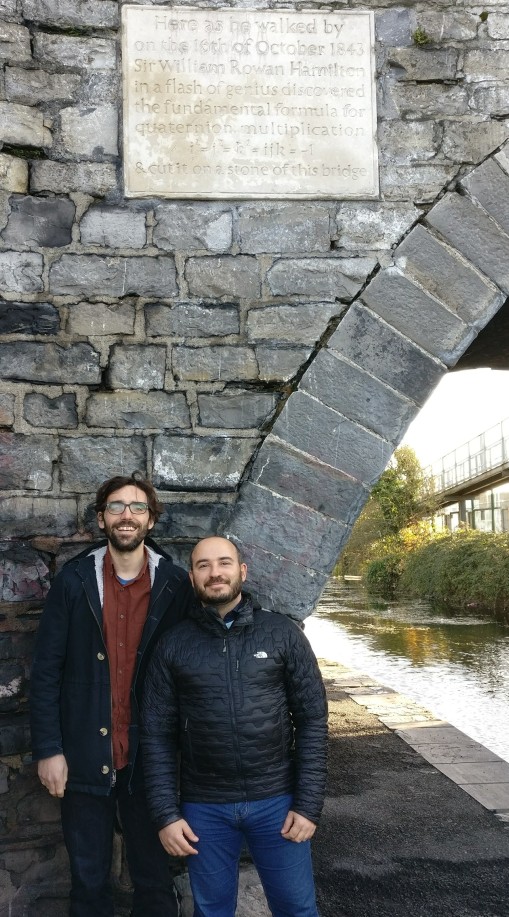 This discovery set in motion a subtle dance intertwining algebra and symmetry. It invites diverse interpretations, but that which suits our purpose best is the realisation of the three families of classical simple Lie algebras, 𝔰𝔳(n+1), 𝔰𝔲(n+1), 𝔰𝔭(n+1), as the infinitesimal isometries of the real, complex and quaternionic projective spaces, ℝℙn, ℂℙn, ℍℙn. The classical Lie algebras are unified as rotations in real, complex and quaternionic universes. Yet, the five remaining exceptional simple Lie algebras, 𝔤2, 𝔣4, 𝔢6, 𝔢7, 𝔢8, are left unaccounted for and, from this perspective at least, geometrically enigmatic.

To remedy this shortcoming we must first return to Dublin, 1843. Hamilton’s college friend, John T. Graves, on receiving word of the quaternions was struck by their seemingly conjured existence, writing to Hamilton on October 26th: “If with your alchemy you can make three pounds of gold, why should you stop there?”. But two months later to the day, Graves reciprocated, sharing with Hamilton a further generalisation of the real ℝ, complex ℂ, and quaternionic ℍ numbers: the octonions 𝕆. Endowed with seven imaginary units, ei,  the octonions constitute the largest example of what are now known as the normed division algebras: ℝ, ℂ, ℍ, 𝕆. The multiplication rules of ei are governed by the Fano plane, as described in figure 1. Using the Cayley-Dickson doubling procedure we can build each algebra from two copies of its predecessor. However, with each doubling a property is lost. In particular, the octonions, unlike their well-mannered older siblings, are non-associative. This makes 𝕆 capricious and uncooperative, but also exceptional. 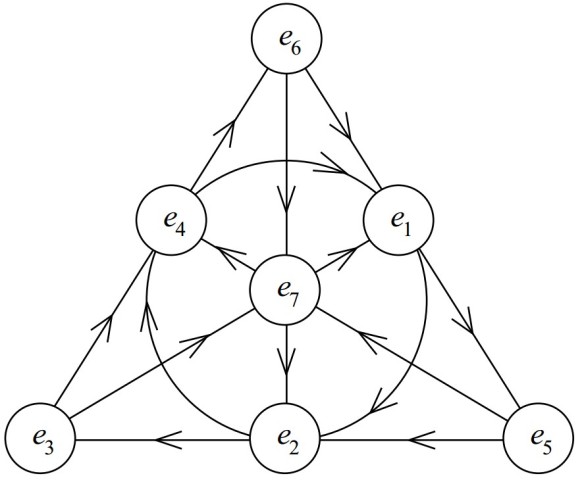 Figure 1: The Fano plane. Following the lines gives the multiplication rules of the imaginary octonions (going against the arrows, one picks up a minus sign).

Returning to the simple Lie algebras, the sequence ℝℙn, ℂℙn, ℍℙn cries out for the inclusion of 𝕆ℙn. The octonionic projective line 𝕆ℙ1 reproduces the classical Lie algebra 𝔰𝔳(8) already accommodated by ℝℙ7. However, the isometries of the next rung on the ladder, the Cayley plane 𝕆ℙ2, do indeed yield an exceptional algebra, namely 𝔣4. However, the non-associativity of 𝕆 renders 𝕆ℙn a bona fide projective space for n ≤ 2 only and consequently the sequence ends here, hence the singular status of 𝔣4. It would seem, naively, that the remaining exceptional algebras do not fit into this story. However, when viewed in the right way, the Cayley plane realisation of 𝔣4 can be generalised by considering not one, but two algebras, ℝ ⊗ 𝕆, ℂ ⊗ 𝕆, ℍ ⊗ 𝕆, and 𝕆 ⊗ 𝕆 yielding precisely the exceptional Lie algebras 𝔣4, 𝔢6, 𝔢7, and 𝔢8. Allowing in this construction the two algebras to vary over all ℝ, ℂ, ℍ, 𝕆, we obtain what has come to be known as the Freudenthal-Rosenfeld-Tits magic square of Lie algebras, as depicted in figure 2. Since these early discoveries, the octonions have been found time and time again lurking in the corners where geometry meets algebra.

Figure 2: The Freudenthal-Rosenfeld-Tits magic square of Lie algebras. The exceptional algebras appear in the octonionic row/column. Each entry can be realised as a symmetry of supergravity.

Although it would be fair to say that the octonions have yet to cement themselves in the annals of physics they have over the years appeared in a variety of suggestive guises. One such occurrence takes place in M-theory, an ambitious, albeit tentative, approach to the challenges of quantum gravity and unification. Being fundamentally non-perturbative, M-theory remains largely mysterious. A vital piece of the puzzle in our present understanding is the notion of “U-duality”. The five consistent ten-dimensional superstring theories and eleven-dimensional supergravity are interconnected through a web of U-duality relations, leading to the conjecture that they merely represent disparate glimpses of a single overarching framework living in D = 11 spacetime dimensions: M-theory. To make contact with our daily four-dimensional experience one can compactify. Although phenomenologically irrelevant, the simplest example of a compactification is given by taking one dimension to form a circle. If the radius of the circle is small enough, this dimension becomes essentially undetectable. By compactifying on an n-torus, that is taking n dimensions as circles, we can descend to D = 11 – n dimensions. The low-energy effective field theory limit of M-theory compactified on an n-torus is the unique maximally supersymmetric D = 11 – n supergravity theory. In this limit, the U-dualities of M-theory are reflected in the global symmetries of the corresponding supergravity theory. In particular, for D = 5, 4, 3 or n = 6, 7, 8 the global symmetry algebras are given by the exceptional  Lie algebras sitting in the octonionic row/column of the magic square[2]. We have overlooked a subtlety here. On compactifying eleven-dimensional supergravity to D = 5, 4, 3 the 𝔢6, 𝔢7, 𝔢8 symmetries are initially hidden, revealing themselves only once a judicious choice of (generalised) electromagnetic duality transformations[3] has been applied.

What happens when some other choice of dualisations is made? Well, the manifest symmetries are typically different in each case. What we demonstrate in our paper is that there exists a choice of dualisations for which a fascinating generalisation of the magic square makes an unexpected appearance. On complexifying the normed division algebras, which we will continue to denote ℝ, ℂ, ℍ, 𝕆, two new algebras in the sequence emerge: the three-dimensional ternions 𝕋, nestled tightly between ℂ and ℍ, and the six-dimensional sextonions 𝕊 sitting half-way from ℍ to 𝕆. Including 𝕋 and 𝕊 in the magic square construction reveals two further half-levels, obscured from view between the oft-visited floors of the ℝ, ℂ, ℍ, 𝕆 edifice. In particular, the 𝕋 ⊗ 𝕆 and 𝕊 ⊗ 𝕆 entries yield the non-reductive exceptional Lie algebras 𝔢6¼ and 𝔢7½, living half-lives somewhere in-between 𝔢6, 𝔢7, and 𝔢8. Remarkably, the entire extended magic square, and so implicitly our enlarged ℝ, ℂ, 𝕋, ℍ, 𝕊, 𝕆 family, is realised through the symmetry algebras of supergravity.

A kind of magic, if you will.

To find out more, read our paper in Classical and Quantum Gravity here.

[1] Now a constituent of the Astronomy and Astrophysics section of the School of Cosmic Physics, Dublin Institute for Advanced Studies.

[2] For all the group theory and supergravity aficionados, please note we are not paying attention to the particular real forms that appear here and throughout.

[3] Not to be confused with the U-dualities of M-theory.

Sextonions and the extended magic square:

1 thought on “A Kind Of Magic”