With the direct observation of gravitational waves produced in black-hole and neutron-star mergers by LIGO (the Laser Interferometry Gravitational-Wave Observatory), we have entered an exciting new era of multi-messenger astronomy.  For the first time, we are able to determine the properties of some of the most violent events in our universe, testing our theories of gravity and particle physics in extreme regimes. 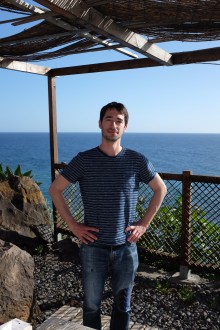 We often think of black holes as giant sinks, which swallow up anything that passes nearby and from which nothing can escape.  However, this picture is not quite right, as Stephen Hawking and others have shown.  In 1971, Roger Penrose discovered a process that allows rotational energy to be extracted from black holes.  Most astrophysical black holes are expected to spin on their axes, due to their formation from the collapse of initially asymmetric or rotating matter distributions.  Understanding how these black holes lose angular momentum is of major interest for gravitational-wave astrophysics and, at the same time, can provide constraints on new models of fundamental physics. A peculiar process of angular-momentum loss is induced by the quantum vacuum of fermionic particles: a co-rotating sea of fermions forms spontaneously around the black hole, extracting some of its rotational energy.

Rotating black holes are described theoretically by the Kerr metric, after Roy Kerr, who found this solution to Albert Einstein’s equations of General Relativity in 1963.  One peculiarity of this solution is the existence of the ergoregion, where physical objects are forced to co-rotate with the black hole.  To extract the black hole’s rotational energy and angular momentum, the Penrose process exploits the unusual properties of the ergoregion.  Specifically, a classical particle incident on the ergoregion can back-scatter inelastically, with the ejected particle having an increased energy.  For scattering waves, a similar process leads to the phenomenon of superradiance: an incident wave can be back-scattered with increased amplitude.  This effect has recently been observed in a water-wave analogue.  Now, if we can arrange for the reflected wave to be directed back towards the black hole after each back-scatter, its amplitude will grow exponentially. 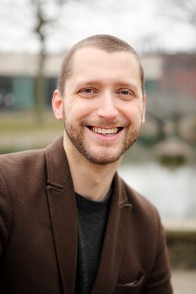 Peter Millington is a Research Fellow in the Particle Cosmology Group at the University of Nottingham.

In quantum theory, massive particles also behave as waves, and massive particles can become trapped near black holes.  A scalar field (describing a spin-zero boson), with Compton wavelength comparable to the size of the black hole, will scatter in the ergoregion and undergo superradiance.  Modes that are trapped near the black hole can then scatter repeatedly, leading to an instability known as the black-hole bomb.  If such light scalar fields exist in nature, this instability affects the population density of certain angular momenta of black holes, allowing observations to set limits on the masses of these fields.

The black-hole bomb instability cannot occur for fermionic fields (having half-integer spin), due to Wolfgang Pauli’s exclusion principle, which prevents more than one fermion being in any given state.  However, rotating black holes emit a steady radiation of massless fermions in the same frequency range as superradiance would be expected for bosons.  This is known as the Unruh–Starobinsky radiation, discovered by William Unruh and Alexei Starobinsky.  When the fermions are massive, the steady radiation is replaced by an instability, corresponding to the decay of the quantum vacuum to a non-trivial state: the Kerr-Fermi sea, where certain fermion modes that co-rotate with the black hole are populated by extracting its rotational energy and angular momentum.

To understand this process, we can use an analogy with strong-field quantum electrodynamics.  Suppose we introduce a binding potential of some initial charge in a theory with massive, charged fermions.  As we increase the charge and hence the depth of the potential, bound states appear at the edge of the positive continuum, moving down through the mass gap as the binding potential strengthens.  When the state reaches the bottom of the mass gap and becomes overcritical, it dives into the negative continuum leading to the spontaneous emission of a positron (see Fig. 1).  As the binding potential becomes critical, the subcritical, neutral vacuum decays into a charged vacuum.  This process is behind autoionization in atomic and nuclear physics. 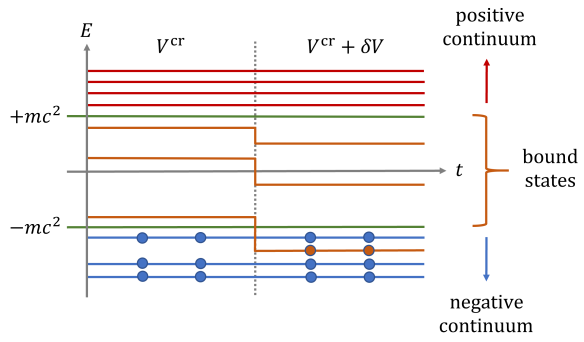 Fig. 1: Atomic states reaching an energy −mc2 lead to the spontaneous emission of a positron as the overcritical state “dives” into the negative-energy continuum.

In the Kerr case, as the angular momentum of the black hole increases, the subcritical, non-rotating vacuum decays into a co-rotating vacuum: the Kerr-Fermi sea.  What we have shown is that this decay is encoded entirely in the spectrum of quasi-normal fermion modes, unstable modes of finite lifetime, and it proceeds as follows. The black hole is formed with an initial angular momentum, and the fermion vacuum is non-rotating.  The emission of the Unruh-Starobinsky radiation then sets in, slowly extracting angular momentum, and some of this radiation is trapped in orbits.  Once every trapped orbit has been filled twice (spin up and spin down), the exclusion principle stops the process, and we are left with the co-rotating Kerr-Fermi sea.  The populated orbits are related to the quasi-normal modes, and, since these trapped states are filled by the Unruh-Starobinsky radiation, they also satisfy the same superradiance conditions as the exponentially growing scalar modes.  The formation of the Kerr-Fermi sea can therefore be regarded as the fermionic pendant of the black-hole bomb instability, with the exponential growth of the instability defused by Pauli’s exclusion principle.

The decay proceeds very slowly for most particles of the Standard Model, since (with the possible exception of the lightest neutrino) their Compton wavelengths are much smaller (or larger, in the case of the photon) than the size of astrophysical black holes.  However, the instability of the quantum vacuum around black holes nevertheless opens the door to new astrophysical constraints on theories beyond the Standard Model and General Relativity.  By observing rotating black holes without a Kerr-Fermi sea, we might be able to rule out the existence of fermions with very low masses, which arise, for example, from string theory or as ultra-light dark-matter candidates.  Similar constraints have been obtained using the black-hole bomb instability for the existence of pseudoscalar axions and on the photon mass, and the dynamics of the Kerr-Fermi sea may offer an exciting new window on the fundamental building blocks of our universe.