One of the central problems of contemporary physics is finding a theory that allows for describing the quantum behavior of the gravitational field. This book is a remarkable update on one of the most promising approaches for the treatment of this problem: loop quantum gravity. It places special emphasis on the covariant techniques, which provide with a definition of the path integral, an approach known as spin foams. It is a field that has undergone quite a bit of development in the last two decades. The book gives an overview of this area, discussing a series of results that are presented with great clarity. Both students and established researchers will benefit from the book, which provides a dependable introduction and reference material for further studies. Only a basic knowledge of general relativity, quantum mechanics and quantum field theory is assumed. The conceptual aspects and key ideas are discussed in the main body of the book and END_OF_DOCUMENT_TOKEN_TO_BE_REPLACED

David Garfinkle is Professor of Physics at Oakland University. His research is in numerical relativity: the use of computer simulations to study the properties of strong gravitational fields.

The word “Handbook” in the title is something of a misnomer: it is perhaps better to think of this book as a collection of mini review articles on various topics in relativity.  The best way to use the book is to think of a topic in relativity about which you would say “I wish I knew and understood more about X, but I don’t have the time to read a review article about X, nor the expertise to understand a typical review article on the subject.”  Then look in the book to see if there is a chapter on X, and if so, read it.  (Then repeat the process for each X).  Each mini review article comprises a chapter and the chapters are organized in sections that reflect a particular aspect of relativity.

The first two sections, Introduction to Spacetime Structure and Foundational Issues concentrate mostly on the basic properties of spacetime and on philosophical issues connected with special and general relativity.  I found these sections END_OF_DOCUMENT_TOKEN_TO_BE_REPLACED

Julian Barbour is an independent theoretical physicist and Visiting Professor in Physics at the University of Oxford. He has specalized in the relational aspects of dynamics.

The Singular Universe is effectively two separate books held together by some common ideas. Roberto Mangabeira Unger is a philosopher, social and legal theorist and politician who helped to bring about democracy in Brazil and has twice been appointed as its Minister of Strategic Affairs (in 2007 and 2015). According to Wikipedia (current entry), “his work begins from the premise that no natural social, political or economic arrangements underlie individual or social activity.” A similar spirit informs his approach to cosmology. Lee Smolin is of course well known as one of the creators of loop quantum gravity and as the author of several popular-science books. For brevity, I shall refer to the authors as RMU and LS. The book is over 500 pages in length. The first part, by RMU, is more than twice the length of LS’s and could have been shortened without loss of essential content. There is a final 20-page section detailing differences of view, which are substantial in some cases because RMU advocates a much greater break with the conventional approach to science than LS.

The two authors are agreed that a new ‘historical’ approach to cosmology is needed. For RMU, the mere fact that the universe has been shown to have a history is enough to indicate that the methods hitherto used to study the universe must be radically modified. LS argues for a new approach because of our failures to understand the history and properties of the universe as so far discovered. He points out that, END_OF_DOCUMENT_TOKEN_TO_BE_REPLACED 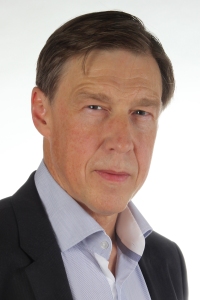 Lars Andersson is a Research Group Leader in the Geometric Analysis and Gravitation group at the Max-Planck-Institut für Gravitationsphysik (Albert-Einstein-Institut).

The two volumes under review document the conference held June 25-29, 2012 at Charles University in Prague to commemorate the 100th anniversary of the productive time Einstein spent in Prague, during which he arrived at the principle of equivalence and also formulated other physical principles, summarized in his 1912 paper [1]. This was a crucial step in the development of general relativity, and Einstein devoted the following years to developing its mathematical formulation, finally arriving at the 1915 theory of general relativity, the centennary of which is now celebrated through many events all over the world.

Coincidentally, the 2012 Prague conference also marked the 70th anniversary of the birth of Jiří Bičák, one of the leading European relativists. He was one of the organizers of the conference and is, together with Tomáš Ledvinka, one of the editors of the current volume. The taste and style, as well as the careful attention to detail of both editors, is END_OF_DOCUMENT_TOKEN_TO_BE_REPLACED

Mihalis Dafermos is Professor of Mathematics at Princeton University

This impressive new book is first and foremost an original and thought-provoking contribution to the study of cosmology in research monograph form, in the best tradition of the kind of deep mathematical work which has played a crucial role in the development of the subject. At the same time, the book doubles as a dependable introduction and  reference for several foundational results in the analysis of the Einstein equations and relativistic kinetic theory which are hard to find elsewhere but which form the basis of so much current (and hopefully, future!) work.

Both these roles are most welcome.

Let me first discuss what this END_OF_DOCUMENT_TOKEN_TO_BE_REPLACED