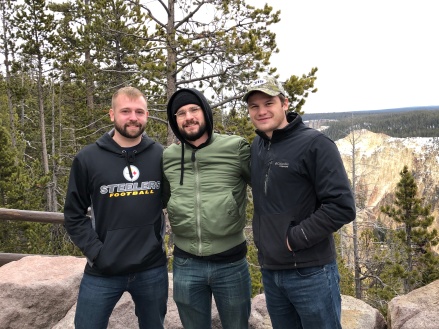 Travis Robson (right), Blake Moore (center), and David Anderson (left) are members of the eXtreme Gravity Institute at Montana State University. Here they are at nearby Yellowstone National Park.

But as with most things in physics, Nature adores the complex if one looks closely enough. Several astrophysical studies have recently shown that binaries may form with moderate eccentricities at orbital separations at which they would be emitting gravitational waves that ground-based detectors could observe very soon. These binaries would form near a supermassive black hole or in globular clusters, where three- or many-body interactions may source eccentricity. And if they are detected, they could shed light on their true population and formation scenario.