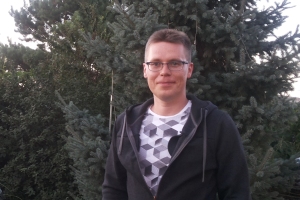 Eugeny Babichev is a CNRS researcher at the Laboratory for Theoretical Physics at Orsay. His work focuses on modified gravity theories, including their theoretical and observational issues, as well as phenomenological aspects, such as cosmology and black holes.

One of the biggest puzzles of modern physics is the present-day accelerated expansion of the Universe. The acceleration is usually attributed to the presence of a mysterious dark energy, a yet unknown substance of the Universe. Although in the framework of conventional General Relativity (GR), a cosmological constant can be added to mimic dark energy, the fine tuning required to adjust its value makes this explanation unsatisfactory. We can then ask whether a modification of END_OF_DOCUMENT_TOKEN_TO_BE_REPLACED

Claudia de Rham is an assistant professor at Case Western Reserve University working on cosmology and particle physics and is particularly interested in models of modified gravity and their embedding within consistent field theory frameworks.

How does matter couple in theories involving several metrics? We unveil the possibility for a new effective metric.

While the theory of general relativity will mark its 100 year anniversary next fall, the realization that the expansion of our universe may currently be accelerating has opened up the door for a series of investigations to understand the behavior of gravity at large distances – as large as the current observable Universe or about 1010 light years. Among the different possible modifications of gravity explored in the past decade, theories of gravity which involve several metrics have played a crucial role. The idea that gravity could be the outcome of several interacting metrics is of course not a new concept and such theories have been explored for more than 70 years, but their consistent realization has only been derived very recently in the past few years, and we are finally reaching a stage where we can understand more precisely how matter couples to gravity in such theories. END_OF_DOCUMENT_TOKEN_TO_BE_REPLACED