The road to black hole thermodynamics with Λ

by  Dmitry Chernyavsky and Kamal Hajian

What are volume and pressure in black hole thermodynamics? That is the question!

What do the gas in a balloon and a black hole have in common? For a regular CQG reader the answer should be obvious; both can be described within the framework of thermodynamics. However we know that the gas in balloon is characterised by volume and pressure, as well as other  thermodynamic quantities. So, a natural question arises about analogues of the volume and pressure for a black hole.
Answering this question, black hole physicists have noticed that if the universe is filled with a non-zero cosmological constant Λ, this mysterious entity can be absorbed in the energy-momentum tensor of matter, and its contribution resembles a perfect fluid with a pressure proportional to Λ. Continuing with this analogy, one can also introduce a ‘thermodynamic volume’ for a black hole. For instance, the appropriate volume which satisfies the first law of thermodynamics for the Schwarzschild black hole is equal to the volume of a ball with the same radius, but in flat space! Using the notions of the black hole pressure P and volume V, it is standard to vary the cosmological constant generalising the first law of black hole thermodynamics by V δP.

END_OF_DOCUMENT_TOKEN_TO_BE_REPLACED 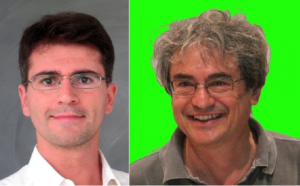 Quantum gravity alone is not the only major theoretical open problem in fundamental physics: gravity, quantum theory and thermodynamics form a triple, whose full interconnections we have definitely not yet understood. As soon as quantum effects appear in a curved spacetime, thermal aspects appear to be unavoidable. Combining thermodynamics and (full) gravity might turn out to be even more crucial than understanding the quantum aspects of the gravitational field alone. In recent years, it has become increasingly clear that entanglement entropy is a central ingredient for the synthesis we are seeking. END_OF_DOCUMENT_TOKEN_TO_BE_REPLACED